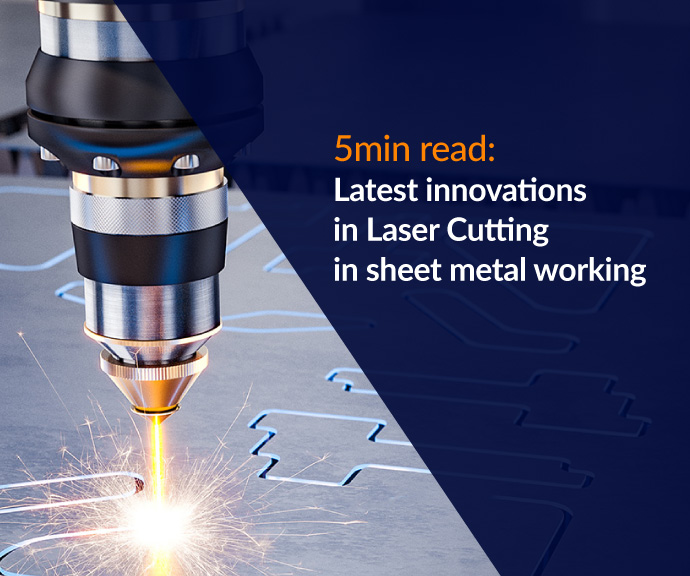 Even though classical sheet metal working strategies such as punching are still indispensable in sheet metal working – especially for larger order volumes – more and more sheet metal processors are also using focused laser beams to cut sheets. Laser technology is becoming increasingly relevant, especially in the area of prototype production or small to exceedingly small batch sizes. But where exactly can "light amplification by stimulated emission of radiation"  show its advantages – and why?

In laser cutting, generally speaking, an extremely strongly focused laser beam is directed at a
point on the surface of the workpiece. The resulting high temperatures vaporise or melt the
material at that point. Depending on the laser process used, so-called process gases are fed to
the laser beam via a nozzle during the cutting process. The process gases can either enhance
the reaction at the cutting point (in the case of reactive gases such as oxygen) or prevent
unwanted effects such as oxidation – which is the case with inert gases such as argon or
nitrogen.

Which laser systems are used in sheet metal working?

The classic in sheet metal working using lasers is the CO2 laser. This technology has been
used in industry for drilling, separating and cutting since 1964. CO2 lasers generate a strong
beam of infrared light through electrically excited gas mixtures, are comparatively inexpensive
and process-safe. Solid-state laser technology, on the other hand, is quite young and is divided
into fibre, rod and disk lasers depending on the shape of the solid. Solid-state lasers rely on an
amplifying medium of crystalline or amorphous solids that contain laser-active ions in precisely
defined concentrations. Since 1995, solid-state lasers have replaced CO2 lasers in many cases
due to significantly better beam qualities, power and efficiency.

For which procedures is laser suitable?

Laser flame cutting is used for thicker or ferrous sheet metal. In this process, oxygen is supplied
from process gas, which reacts at the cut surface with the material melted by the laser.
An exothermic reaction occurs that releases energy and burns the material in the cut joint.
However, the cutting process oxidises the material on the cut surface, so that rework may be
necessary.

Laser fusion cutting is particularly suitable for cutting thin sheets. Here, the material is melted by
the laser at the interface and blown out of the joint by a supplied, inert process gas. The
immediate removal of the melted material prevents oxidation at the kerf. In many cases, this means that no further rework is necessary after laser processing – because burrs do not occur
during laser fusion cutting either.

When is laser cutting of sheet metal advantageous?

Laser machining also allows small batch sizes to be produced flexibly and without the need for
special tools. The laser cuts any, even highly complex contours from the sheet metal – with
minimal set-up effort. Expensive, because unproductive, set-up and non-productive times in the
laser processing of sheet metal are almost completely eliminated. Another advantage is that
laser fusion cutting does not produce any burrs at the kerf. This makes rework unnecessary.
Whenever small quantities have to be produced or orders with expected, rapid changes to the
contour have to be realised, the laser has an advantage over conventional methods in
sheet metal working. When it comes to series production of large or exceptionally large
quantities with the same contour every time, however, conventional processes such as
punching are still more economical because they are much faster.

Whatever processing method you need for your sheets – you are guaranteed to find the
right manufacturer with us. Why not take a look around our site right now!

The vision of completely networked sheet metal production will also remain primarily a vision in 2022. Because in reality, the “smart factory” with its completely...

"Digital Workshop": How SMEs in particular benefit from Industry 4.0

When the media talk about Industry 4.0, smart factories and networked production lines, the focus is usually on international corporations. Yet, the "digital workshop"...